Because many of you are concerned about James...

Note - most current information at top (NOTE: This page is NOT in the menu system, so you can only get to this page if you know the address)

4/22/20 - Tona advises us that James continues to improve - memory is coming back.  He will be transferred to a Rehab facility in College Station for about 10 days, but is doing GREAT!

4/20/20 - Noon - Tona actually got in to see James today!  He's looking great, smiling, ready to go back for hearth cath to see if it can be determined what happened.  There will be necessary rehab, but things are looking better and better.  Tona and Shirley stopped by the Pastor's house yesterday, very encouraged by what they've been hearing from the doctors, and it was hoped that Tona would actually be allowed to visit James today -- Mission accomplished!!!

Keep praying, and don't forget to THANK GOD for what He has done thus far, and for what He will do as James continues to improve. 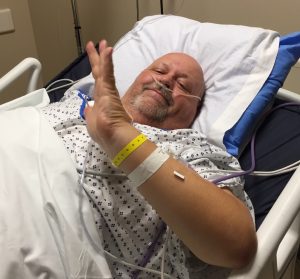 4/18/20 -2:50 PM - Time to shout GLORY!  James is awake, nurse called Tona and asked if she wanted to speak to James.  James is talking, making sense, Tona is dancing a GLORY dance!  Please continue to pray - but don't forget to pray a prayer of Thanksgiving, for God is good --- and, yeah, ALL the Time!


4/17/20 -10:30 AM - OK, NOW it is official - James is off ventilator, breathing on his own, and has responded to "hand squeezing".  Doctor is "cautiously optimistic" and things are looking better.  IF James needs assistance with breathing again, it will be more of a CPAP type of assistance, and a CT scan is likely later today.  Tona is encouraged, and appreciates your prayers.


4/16/20 -7:30 PM - OK, sometimes reports can be inaccurate -- James is not off the respirator yet - that will probably happen tomorrow.  However, blood pressure and heart rate are good, he's off the 'hard drugs', and the doctor reported that, when he calls James' name, James opens his eyes and looks directly at the doctor, then goes back to sleep.  Doctor still seemed optimistic.  If there is no change tomorrow, they'll do another CT scan.


4/16/20 -5:00 PM - Thermal cooling is over - James is warmed up, and off ventilator.  Breathing on his own, and opened his eyes, though not quite awake yet.  Tona will have a phone call with the doctor this evening, and we'll post the update here.


4/15/20 -7:00 PM - Doctor says they will wake James up in the morning and try to take him off ventilator.  All lab work has been good, and now it comes down to how he responds to commands when he's waking up.  They'll also be doing a heart cath to see what actually went wrong.  Thanks so much for your prayers -- please keep it up!


4/15/20 -11:00 AM - Tona stopped by today and visited with Denise and Pastor.  James continues to do well, the warming up process is well under way, and they will probably wake him up this evening.  Still sounding very good, but prayers are appreciated!


4/14/20 -7:30 PM - Results from CT scan are encouraging.  They will begin warming James up (still in the thermal cooling rig) tonight about 9 PM.  That could take 24 hours or more, then they will begin waking him up.  Keep praying, things are still looking pretty good!


4/14/20 -11:30 AM - Pastor heard from Tona this morning -- After LOTS of confusion and frustration, Tona finally got hold of somebody at the hospital who confirmed James was still stable, but it's likely that he DID have a heart attack, despite the absence of any evidence on the EKG or other tests last night.  CT results are not yet back, and James is still in the thermal blanket to keep him cool for the next 24 to 36 hours.  That's not at all unusual for his situation, but that's what we know thus far.  Tona is doing well, and I am conveying your thoughts and prayers to her.  She called during our "Pastor & Men" meeting this morning, so we prayed with her over the phone.


4/14/20 -9:05 AM - No news is good news!!!  They have all Tona's contact info, and, as of this morning, she has not heard anything at all.  She sees this as good, because they would have called her if there were a problem.  We're hoping to get an update about Noon, and will post it here.

4/13/20 - About 3:30 in the afternoon, James and Tona were working at landscaping the area around their pool.  They had been talking, but James suddenly collapsed, unresponsive.  Shirley called 911 while Tona got a neighbor who came over and started CPR.  James had no pulse at that time, but the neighbor kept up CPR until EMS arrived, and they took over.  They managed to get a pulse, and after much work, got James stable enough for transport to Scott & White College Station.

Pastor Billy drove Tona and Shirley to the hospital, where one of our EMS friends managed to get us into the hospital ER in spite of the fact that there was "ZERO VISITOR" policy throughout.

Initial Doctor reports were MUCH better than we had anticipated, as James was stable, wrapped in a cooling blanket, and on ventilator for breathing - but EKG showed no sign of heart attack. Throughout the afternoon and into the evening, the reports kept being better than we would have anticipated.

Finally, there came a point at which they would take James to CT, then to ICU - but NOT the heart cath lab (this is good) and Tona would not be able to accompany James any further.

More news will be posted here as we get it, so everybody gets the same information.